One of my favorite bands is They Might Be Giants.  I have loved the Johns and their music since college. Soon after my oldest son was born, TMBG came out with their first kids album, NO!, so I got to share their music with him.  TMBG and all of their albums have taken us on many a long car trip in musical agreement.

Recently, the band played in Philadelphia for a free show with WHYY.  The band played some new songs from their new album Nanobots but also many great classics that I have loved for years.  One of the songs they played was Ana Ng.  A great song that tells a great story but also has a line that says: "I don't want the world, I just want your half."  As the song was playing, I was inspired to try and create a ZIA inspired by that line.  It has been a while since I created a ZIA just for me so I thought that this would be a great one to do.

I started this one with just the circle and dividing lines drawn.  I didn't use a string to further divide, I just went with designs as they came to me and went from there.  This one is on watercolor paper and is 7.5" X 9". It is an odd size, but I wasn't thinking about that when I started. 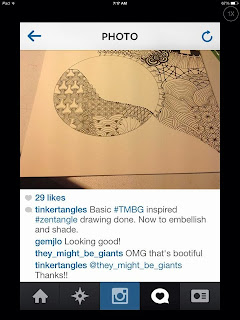 Now to nerd out for a moment.  I have an instagram account (@TinkerTangles) where I post photos of my work as I go.  It is fun for me to share my process and sometimes, if I get stuck, seek out some feedback from others.  After I got the drawing done, I posted a snap of it and shortly went to bed.  When I woke the next morning I found a comment.  See that there, the one from they_might_be_giants?  That is from the band! Not gonna lie, I almost shouted with glee.  I'm a dork I know but that was so cool to see.  My 13 year old was pretty impressed.  TMBG is now one of his favorite bands as well, so he could share in my excitement.

I working on this drawing though, I learned a pretty important lesson.  DO NOT LEAVE ART SITTING ON THE FUTON!  I have a room in the house that I have taken over as my "studio".  It does double duty as the guest room as well, so there is a futon in there.  When guests aren't sleeping on it, the futon becomes a staging location for what I am doing.  It's covered with paper, paper cutter, bags from Michaels etc.  So, as my desk was full, I put the drawing on there while I worked on something else.  The cat managed to scrape his claws across it and marked the paper. You can see it in the image.  Luckily, I can remove the most visible marks in my photo program.  I am going to get a limited number of prints made of this so, removing those scratches is important to me.

So, lessons learned, art made.  I hope that you like this piece.  Leaving so much "empty" space is something that I usually don't do.  This one a fun one.  It holds a personal meaning to me and was a lot of fun to do.

Wanna hear the song that inspired this?  Check out this video:

Posted by JJ LaBarbera at 11:28 AM No comments:

Email ThisBlogThis!Share to TwitterShare to FacebookShare to Pinterest
Labels: Ana Ng, They Might Be Giants, TMBG, zentangle, Zentangle Inspired Art

The other day I realized that it has been 4 (!) months since my last blog post.  I really need to set time aside each week to sit and post something for those who visit here.  I won't promise that I will though.  Because I know me.  I will try, but I can't say I will.  I have been furiously working away however.

In the attempt to create an alphabet in tangles, I decided that I will try to use the Diva's Challenge each week as not only a challenge for Zentangle but as a double challenge to myself to work on an alphabet tile.  I am using some letter cookie cutters that a dear friend gave me long ago as my stencil.  I really love cookie cutters as stencils.  They come in all shapes and sizes and no printing is required.  Just set it where you'd like the design, trace the outline and get get started.

This week is the first in the (hopefully) future series of 26.  As M was at the top of the bucket, M is the kickoff letter.  The challenge is to use just two patterns on the tile.  Those tangles are Knightsbridge (a checkerboard pattern) and Tipple (circles). 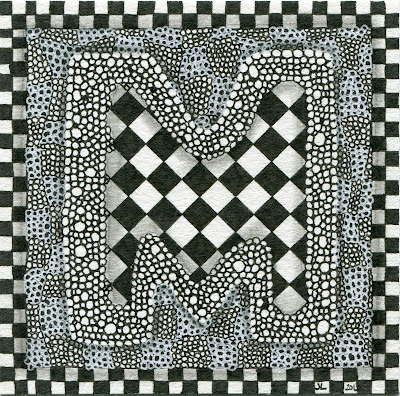 I started with the M, using it as a string in this piece.  I drew out the boarder first.  I knew I wanted that to be Knightsbridge.  Then I tippled (is too a word) the M.  I thought about varying the center here and adding to the Knightsbridge but I decided that simple was the way to go.  After getting that done, I had this empty spot that I needed to put something in.  The blank paper was just too empty and didn't look right.  So after a mid morning trip to Starbucks and the Post Office, I came back to this.  With caffeine kicking, I decided to freehand some wonky lines for the Knightsbridge and then Tipple over the spaces.  Combining them to make a  Tipplebridge.  Tee hee!

Things were a bit busy there until I got some shading in to pop the M up from the background.  Here I only shaded around the M and again at the outer edge, separating the Tipple from the border.  In the end, I am happy how this turned out.  I wasn't sure that the final tile wouldn't look too busy, it still is.  With the shading however, the separate layers "stack" as it were, to make things easy to see.

I hope to sit and get some more posts in soon.  I have been working on Shrinky Dinks lately.  I have been using past Bright Owl challenges to make medallions for necklaces.  I have also been doing some rectangle pendants.  I debuted them at the local Arden Fair and the necklaces sold quite well.  So well, that I posted the remaining in my etsy shop.  I have made 4 more in the last few weeks and hope to have them completed soon.

So, have a great day all you out there!  I look forward to seeing what cool things you have come up with for this challenge.
Posted by JJ LaBarbera at 2:33 PM 13 comments:

JJ LaBarbera
A Mom, a wife, a friend and a wanna be artist. Visit my Etsy shop at http://www.etsy.com/shop/tinkertangles